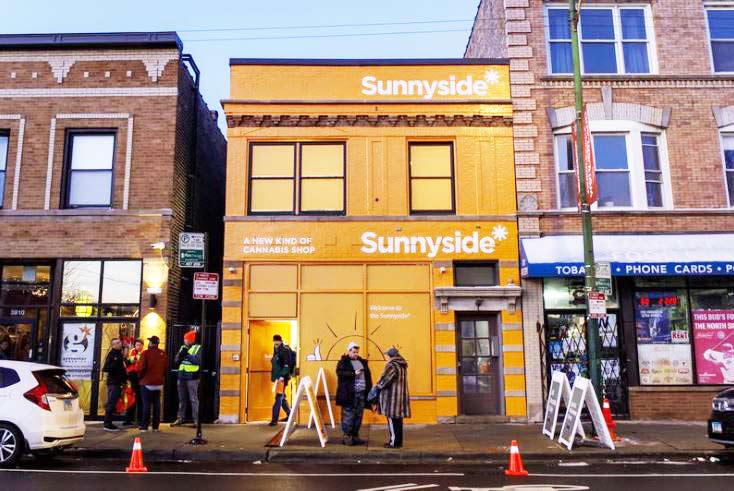 Chicago, IL – Today workers at the Sunnyside dispensary in Chicago won their election, by an overwhelming majority, and will join Illinois’s Cannabis Union, Local 881 UFCW. The dispensary, owned by Cresco Labs, employs 40 people and is located in the Lakeview neighborhood.

The workers faced an unusually long wait to receive the results of their election, originally petitioned for on April 3, 2020. The National Labor Relations Boards originally ordered that the election would be held by mail-in ballot instead of in person voting. However, the pandemic caused the vote count to be postponed multiple times.
“The entire process has tested everyone’s resolve, but we came through in the end,” said Nicholas Stankus, a Sunnyside employee. “This group is proud to be the first cannabis dispensary workers to unionize with Local 881 UFCW and participate in the growth of Illinois’s cannabis industry.”

The workers at Sunnyside, are the first dispensary workers in Illinois to win a Union election. They were motivated to Unionize in order to improve their working conditions. Workers cited issues such as a lack of professionalism from management, unclear workplace policies and procedures, a slow and inadequate response to the challenges of the coronavirus, and a growing culture of disrespect for workers.

“The workers at Sunnyside are a great example of what happens when workers stand together and fight for what they want,” said Local 881 President Steve Powell, “This was a long wait, but better careers are worth fighting for. Our Union is proud of these workers and looks forward to negotiating a contract that will be worth the wait!”

Local 881 is among the largest affiliates of the UFCW, which is proud to represent tens of thousands of cannabis workers across multiple states. UFCW members in the legal cannabis industry work in growing and cultivating facilities, manufacturing and processing facilities, and also in laboratories and dispensaries. Local 881 made history in January 2020, when over 100 workers at the Cresco Labs grow facility in Joliet, IL voted to join Local 881. Sunnyside is the national retail brand of Cresco Labs. Cresco operates seven Sunnyside locations throughout Illinois.

For more information about the fight to improve the Cannabis industry in Illinois, visit: ILCannabisWorkersUnited.org