Today members from Jewel Local 881 Bargaining Committee counted ALL ballots received. Several rank-and-file Jewel members were also attendance as observers and counters. We are pleased to report that the new three-year contract has been approved and accepted by a majority of the members of Jewel Foods Stores.

This has truly been a unique bargaining cycle; unlike any we have ever seen. When the first agreement was rejected by Jewel members in August, it was a wake-up call for your employer but also quite honestly, for the Union. We recognized during the first round, that there was a disconnect between the members and the truth about how the bargaining process works. As a result, your Union was committed to investing more time being present and available in the stores to talk and work through the concerns of the membership.

What has transpired over the last few months has been incredible. A new wave of Union activism and engagement on the part of Local 881 members has occurred. What started with apathy and frustration ended with productive conversations. There were members that were OPPOSED to the direction of the new contract and there were others that were in FAVOR. Whether for or against, we are so proud that Local 881 members spoke up, asked good questions, came to meetings, called the office, talked to their coworkers, pushed for a better agreement, and most of all took the time to be involved in this process.

Going back to the negotiation table was a huge risk! We could have faced concessions and takeaways. But the committee was emboldened by the incredibly clear and vocal direction from the membership about needing to get to a better offer!

After several bargaining sessions, the negotiating committee was able to achieve their two most important goals:

We want to recognize the hard work of the negotiating committee members. Their time and input have been invaluable. It’s not easy to stand up to your employer, but these brave members did. We are grateful for their service and dedication to the Union and to their fellow Jewel coworkers.

Now that the contract is signed, our work is NOT over, it is only just beginning. The future is uncertain. The industry is changing rapidly. The looming merger recently announced will become our Union’s top priority in working to OPPOSE any corporate power grab that could potentially impact our members’ livelihoods.

We understand and expect that some Jewel members will be unhappy with the new contract, and with the Union. We know that we have work to do in earning your trust. If you’re angry, let’s talk about it. Come to a meeting, get involved, speak with your Union Rep, speak with President Powell, we are available and open to constructive criticism. With your passion, activism, and involvement we will only be stronger.

You might be upset with the Union, and you might not love or agree with everything we do, but the reality is we will always have your back. Your employer is busy trying to make every buck they can and would love nothing more than to see division within our ranks. We need to use ALL our collective strength for what is coming! We have been proud to represent Jewel workers for decades and we have never wavered from our commitment to protecting and fighting on your behalf.

It is our privilege to be at your service. Should you have any questions, please contact your Union Representative at 847-294-5064 to discuss any concerns you have.

Congratulations to the Local 881 members at Mariano’s who voted to ratify their new four-year contract.

Over the years, Mariano’s members have been very outspoken about their frustration with the current leveling system. The Bargaining Committee was proud to negotiate a new contract that both increased wages AND provided a complete transformation of old leveling system with a more flexible wage progression scale allowing for larger increases over time. In the old contract, you could be stuck at a certain level and only see minimal increases over time. The new contract allows for more significant wage increases over the life of the contract.

Members participated in a IN-PERSON vote at their stores. Union Representatives were on hand to help explain the new wage scales and answer questions. Ballots were then counted at the Des Plaines office by rank-and-file members with other Mariano’s workers present as observers.

Additional improvements to the contract included:

If you are not sure where you fall in the proposed wage scale or how you will be impacted throughout the contract, please contact your Union Representative at 847-294-5064 for clarification. Reps are available to personally walk you through the information. 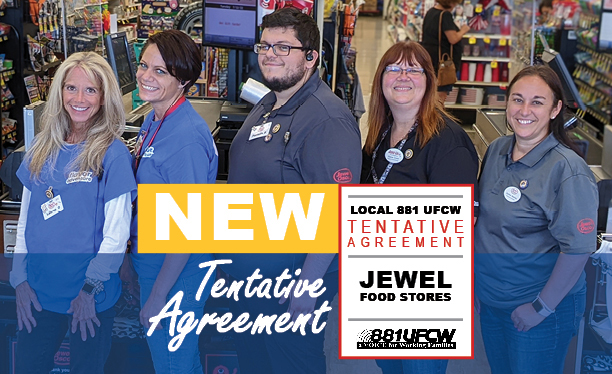 After additional bargaining sessions, we were able to reach a NEW Tentative Contract Agreement Offer on behalf of the membership at Jewel Foods.

As of today, the NEW offer is being printed and prepared for mailing.

What’s in this NEW offer?

The NEW agreement has been RECOMMENDED by your fellow coworkers on the bargaining committee.

We anticipate voting ballots to be in member mailboxes at the end of next week.

We encourage every eligible member to participate in the ratification process and cast a vote. The members alone will decide the outcome. Ballots must be returned to Local 881 Office by Noon on October 20, 2022. Only the ballots returned by the deadline can be counted.

What happens if you don’t vote?

There are many false rumors that fly around the stores during negotiations. The most dangerous rumor is that not voting somehow counts as a yes vote. This is ludicrous. The reality is: Nothing happens if you DON’T vote. Only the ballots that are returned to the office will be counted. The only way for your vote to be counted is if you participate and return the ballot! If you want your voice to be heard, you must return your ballot to the Local 881 Office by noon on October 20th.

The Entire Contract is being voted on!

Although the document you review during ratification only includes the changes to the current contract, you are being asked to vote to accept or reject the ENTIRE CONTRACT! In addition to wages, there are numerous provisions and protections throughout your Union contract that impact your job. Things like Health Insurance Benefits (including the 1993 waiver), Minimum Hours, Disability Benefits, Premium Pay, Vacations/Holidays/Personal Holidays, and the Grievance Procedure. Each time we sit down at the table to negotiate the ENTIRE contract is always at risk! And we all know there are so many things the Company would love to get rid of or change.

Talk to your Rep with any concerns you have!

Should you have any questions we continue to be at your service and invite you to contact your Union Representative at 847-294-5064 to discuss any concerns you have.

Back to the Bargaining Table

This week your Local 881 Negotiation Committee returns to the bargaining table to fight for improvements to the previous offer. Because there is a lot of misinformation being circulated in the stores and on social media, we would like to provide some KEY FACTS as negotiations move forward. Please keep the following in mind:

During these challenging times we must remain united. Our only hope to winning a strong contract is to stand together. We will continue to update you with developments. We encourage you to talk with your Union Representative with any questions you have about the negotiations process.

The Company has agreed to meet with the Local 881 Negotiation Committee for several bargaining sessions including:

The Local 881 Negotiation Committee is eager to get back to the table.

At this time, Local 881 has submitted multiple dates to the Company for Negotiation Meetings. We are waiting for the Company to respond and confirm their availability.