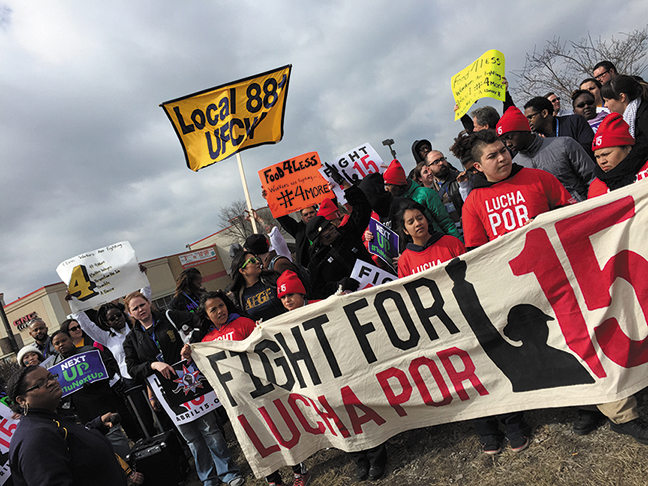 WHAT:  March, rally, and press conference to launch the Food4Less Union Organizing campaign with the support of the Fight for 15 movement, United Steelworkers, AFL-CIO NextUp Summit, and Aldermanic Candidate, Tara Stamps.

WHERE:  Rally participants will be marching from the McDonald’s at 5133 W. North Ave to the southwest corner of North Avenue and Cicero (near Food4Less store at 4821 W. North Avenue). The press conference will be held at approximately 11:15am.

In a show of solidarity, Fast Food workers and Tara Stamps, Aldermanic Candidate in the 37th Ward will march with us. Fast food workers in the Fight for $15 campaign have sparked a national, low-wage worker movement by courageously standing up to fast food corporations and demanding $15 an hour and the right to form a union. As a rank-and-file activist with her own union, the Chicago Teachers Union, Tara Stamps is a supporter of the fight for fair wages and safe working conditions in the 37th Ward and throughout Chicago. Food4Less and McDonald’s workers will be joined by labor and community groups such as UFCW, United Steelworkers, and Union workers from across the country in conjunction with the AFL-CIO NextUP Summit.

On April 15, the Fight For 15 movement will have the largest mobilization to date to demand a $15 living wage and union rights from fast food corporations like McDonald’s. In Chicago, Fast food workers will be joined by thousands of low-wage workers, community allies, religious leaders, and students.

Local 881 UFCW represents 34,000 members employed in retail food and drug stores throughout Illinois and Northwest Indiana, as well as a professional division comprised of health and nursing home workers, barbers and cosmetologists, and workers in other retail and service industries.  Among the companies under contract with Local 881 are Jewel Food Stores, Osco Drug, Mariano’s Fresh Market, CVS Pharmacy, Kroger, Schnucks, and many smaller chains and independent stores, as well as nursing homes and other business establishments. Local 881 is among the largest affiliates of the United Food and Commercial Workers International Union, which represents 1.3 million members in the United States, Canada and Puerto Rico.