More and more workers are choosing to join the growing IL Cannabis Union! 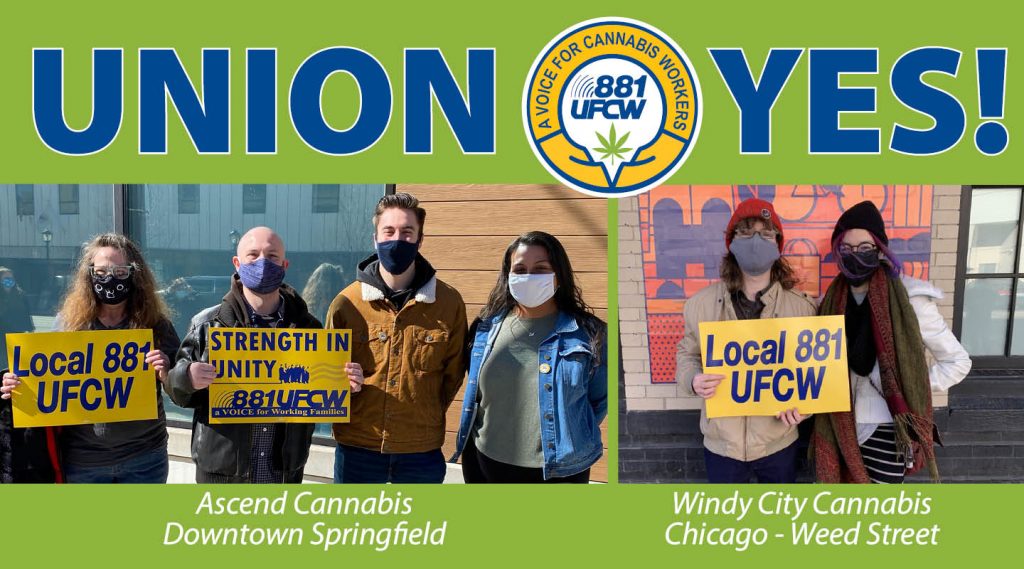 Des Plaines, IL – Cannabis workers continue to fight to improve working conditions in the cannabis industry as companies report billions in sales. Local 881 of the United Food and Commercial Workers Union (UFCW) has recently filed petitions for Union elections at two dispensaries, including, Windy City Cannabis/Curaleaf in Chicago and Ascend Cannabis Dispensary in Springfield, Illinois. The National Labor Relations Board has announced that the workers at Windy City will participate in a mail-in election, with votes scheduled to be counted in late March.

Workers at these two dispensaries understand that it is up to the employees to improve working conditions in the cannabis industry. The workers realize they cannot afford to wait for corporations to address the rampant issues in the workplace. These two locations may be located in very different parts of the state, but they share a common goal of converting cannabis ‘jobs’ into real sustainable careers with the respect they deserve.

The Windy City Cannabis/Curaleaf and Ascend workers are organizing to gain:

“We spoke up when our hours were cut. We spoke up when our paid holidays were taken away. We spoke up about safety concerns, COVID protections, and clarity when someone in our building tests positive. And we were ignored!” reported Eric, an employee from Ascend Cannabis in Springfield. “Some of us were harassed, censored, and intimidated for speaking up. A Union will give us a voice that will be heard!”

“A Union contract will protect our future as workers, and benefit future employees as the cannabis industry expands throughout Illinois,” said Anne, an employee from Windy City Cannabis on Weed St. in Chicago. “Workers will get to have a say in wages, working conditions, COVID measures, and more. Unionization is the only way to truly hold an employer accountable for its promises and obligations to employees.”

“We are the face of this company. We are the reason for its sustained and continued success,” said Jon, an employee from Ascend Cannabis in Springfield. “Our ability to have a voice will guarantee us a future in this business, which is something we all have worked very hard for.”

“Unionizing isn’t just about the issues of the present, but about our future within the cannabis industry. Large corporations make hundreds of millions in annual revenue, while the essential workers on the front lines are barely walking away with scraps from the table. This is not only about us, but also any individual that wants to create real change in the cannabis industry.” said Austin, an employee from Windy City Cannabis on Weed St in Chicago.

“Our Local Union continues to support cannabis workers because they deserve so much better,” said Steve Powell, Local 881 UFCW President. “We all know how well the cannabis companies are profiting. This is great news for our state, but not if the employees are not benefiting from the unbelievable profits. We call on Windy City Cannabis and Ascend to do the right thing and respect their employees’ wishes to join our Union.”

Cannabis workers across the state are joining with Local 881 to make meaningful change to the cannabis industry in Illinois. At the end of 2020, workers at Cresco Labs in Joliet, one of the largest cannabis companies operating in Illinois, voted overwhelmingly to ratify the first Cannabis Union contract in Illinois. Local 881 was successful in negotiating wage increases, more paid leave, a higher 401k match, lower health insurance rates, an increased employee product discount, a robust grievance procedure, and stronger seniority protection language for the Cresco Joliet workers. The Illinois cannabis industry produced over $1 Billion in record sales last year, and can afford to improve the wages, benefits, and working condition for industry employees. Local 881 is committed to ensuring that the cannabis industry lives up to the promises it made to the communities when it lobbied for their support for legalization. For more information about the fight to improve the cannabis industry in Illinois, visit: ILCannabisWorkersUnited.org

For more information about the fight to improve the Cannabis industry in Illinois, visit: ILCannabisWorkersUnited.org