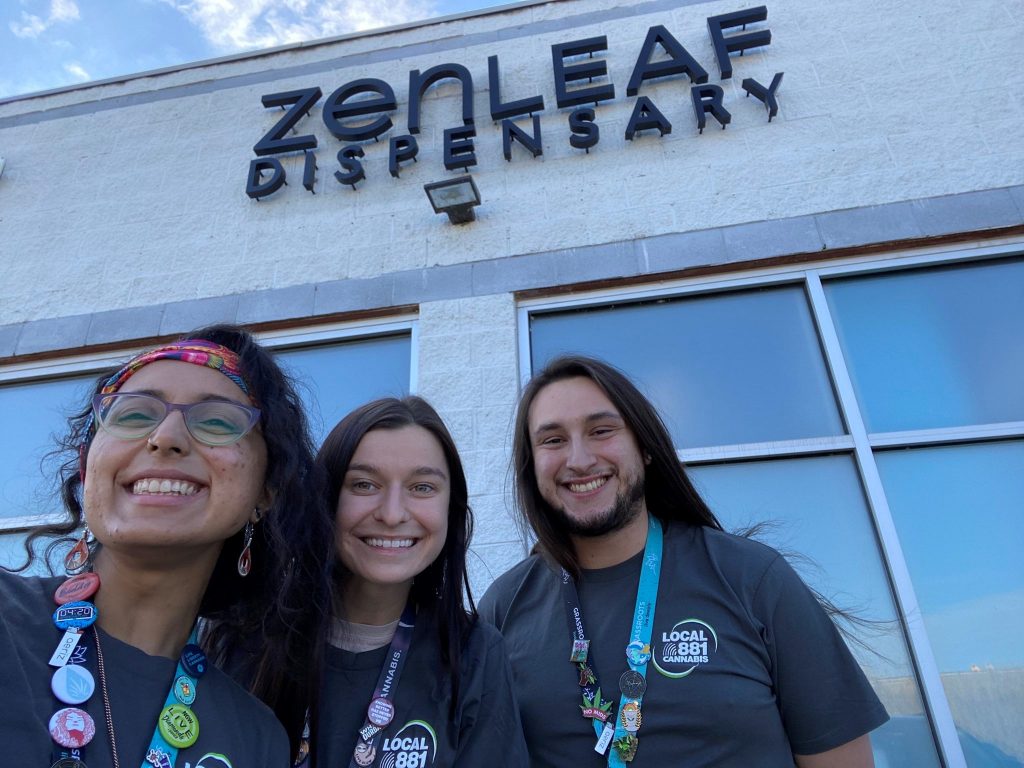 Highland Park, IL – Today workers at Zen Leaf/Verano cannabis dispensary in Highland Park celebrated the certification of their recent Union representation election and will join Local 881 of the United Food and Commercial Workers, the Union for Cannabis Workers in Illinois.

Due to Covid concerns, the National Labor Relations Board counted the mail-in ballots over zoom on February 10, 2022. An overwhelming majority of the 26 workers at the dispensary voted to join the Union. These workers voted yes to join Local 881 UFCW hoping to dramatically improve their working conditions.

Zen Leaf workers in Highland Park reached out to Local 881 in November, out of frustration with many workplace issues at the dispensary. The company’s lack of respect for the workers and their knowledge of cannabis was a driving factor in the organizing campaign.

“We’re elated and excited to move forward as the first Zen Leaf in Illinois to unionize! The work that frontline cannabis workers do is incredibly undervalued. This isn’t just an entry-level hospitality gig; we are working closely with people’s mental health and debilitating medical conditions,” explained Akemi Almeida, Zen Leaf Highland Park Agent in Charge. “We love our patients and our jobs – we also know there is a significant misdistribution of wealth in the cannabis industry that needs to be addressed! We are happy to reclaim our voice, inspire other, and begin to set a new standard for the cannabis industry.”

The Zen Leaf workers in Highland Park are hoping to gain:

“We believe workers deserve so much better than the horrible gig model big cannabis company’s offer,” said Steve Powell, Local 881 UFCW President. “Cannabis companies are raking in profits on the backs of their dedicated and knowledgeable frontline workers. We look forward to helping the workers of Zen Leaf Highland Park raise their voices to create a better future for themselves in cannabis, by negotiating real workplace change and security through a Local 881 union contract.”

Local 881 UFCW represents 34,000 members employed in retail food and drug stores throughout Illinois and Northwest Indiana, cannabis workers in Illinois, as well as a professional division comprised of health and nursing home workers, barbers and cosmetologists, and workers in other retail and service industries. Among the companies under contract with Local 881 are Jewel Food Stores, Osco Drug, Mariano’s, CVS Pharmacy, Kroger, Schnucks, Conagra Brands, Cresco, Sunnyside, and many smaller chains and independent stores, and other business establishments. Local 881 is among the largest affiliates of the United Food and Commercial Workers International Union, which represents 1.3 million members in the United States, Canada and Puerto Rico.