Over 450,000 Chicago Workers will gain access to Earned Sick Leave 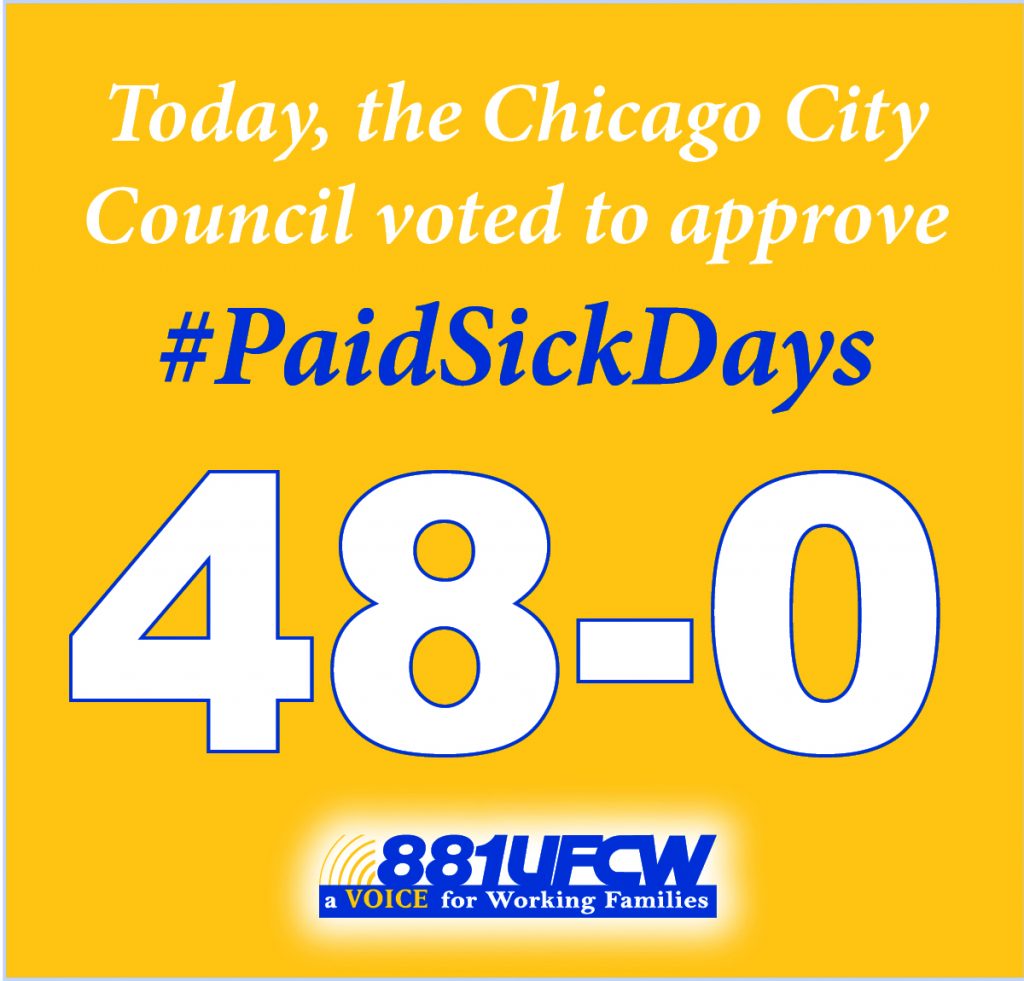 “On behalf of the 8,000 hardworking members of Local 881 UFCW who live and work in every neighborhood of Chicago, I commend the 48 supportive voting members of the Chicago City Council for passing the Earned Sick Leave Ordinance. In 2015, voters in every ward of Chicago overwhelmingly supported extending earned sick leave to working families who are one flu season away from losing their job and economic hardship. We are pleased today that the City Council listened to the working people of Chicago! This is a historic step for our city and a victory for workers and our communities.

It has been our privilege to be a founding member of the Earned Sick Time Chicago Coalition, a partnership of community, public health, faith, women’s advocacy, and labor organizations that worked together to raise awareness of this issue. The Coalition has worked tirelessly with sponsors of the ordinance and members of the Working Families Taskforce to see this through. Our heartfelt thanks and sincere gratitude goes to Alderman Foulkes (16th), who is a proud former member of Local 881 UFCW, along with Aldermen Pawar (47th) and Moreno (1st). We have been grateful for your dedication and commitment to working families.”

As one of the leading private sector unions, with members employed in retail food and drug stores throughout Chicago, Local 881 UFCW has a strong interest in ensuring that earned sick leave is a right extended to all members of the working public, not just to our members who collectively bargain to be able to take a day off if they need to visit the doctor. Bottom line, offering a minimum of five earned sick days to workers throughout Chicago will help boost the local economy and is the compassionate thing to do.

Today, city leaders took a historic step by voting to pass an ordinance that guarantees all workers the right to earn paid sick time. Chicago joins a number of cities, counties and states across the country debating and enacting similar standards. The decision will most dramatically benefit the city’s private sector workers, 42 percent of whom currently do not have access to a single sick day, according to a poll from the Institute for Women’s Policy Research.

Local 881 UFCW represents 34,000 members employed in retail food and drug stores throughout Illinois and Northwest Indiana, as well as a professional division comprised of health and nursing home workers, barbers and cosmetologists, and workers in other retail and service industries.  Among the companies under contract with Local 881 are Jewel Food Stores, Osco Drug, Mariano’s Fresh Market, CVS Pharmacy, Kroger, Schnucks, Pinnacle Foods, and many smaller chains and independent stores, as well as nursing homes and other business establishments. Local 881 is among the largest affiliates of the United Food and Commercial Workers International Union, which represents 1.3 million members in the United States, Canada and Puerto Rico.